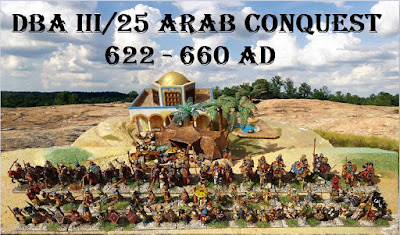 This project has taken a while to complete as it is unexpectedly large for a DBA army: (excluding baggage, it has 22 mounted figures and 52 foot - so 96 'pieces' in 'old money', over 100 including the camp) ... this is because there are some dismounts in the earlier period, and because there is a significant shift between (a) and (b).

Normally I don't do 'all options' (or indeed, many options) because I find it annoying to go to the trouble of crafting a particular army and boxing it up ready to use - then when taking it out to play, finding it isn't, in fact, ready to go.  Indeed, it has happened that I have ended up with 13 elements in play (having assumed the army was in the box and good to go, only to find, on counting up later, that there was an option that needed to be selected).

So my usual practice is to work out the definitive army, and prep and paint that. That is what you get in the box.

The Arab list is problematic, however ... the battle I have researched the most is Yarmouk in 636.  It falls 2 years before the list 25 transition to significant cavalry yet was won by Khalid's mobile reserve of regular cavalry.

I don't know why the list designer puts the transition in 639 (there's bound to be a good historical reason, but I think you need all that cavalry earlier) ... 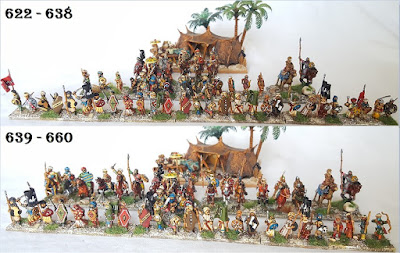 The key difference, therefore, is that, up to 638, the list is almost entirely infantry with a couple of dismountables ... then, from 639, 2 swordsmen, an archer and the camels become regular 'jund' cavalry.

It might also be worth noting here that at Yarmouk, Khalid re-equiped his infantry as spearmen, but here, throughout the period, they are all swordsmen (4Bd) ...

Also I should say that I intended this to be a fairly 'brown' army ... not particularly wealthy soldiers campaigning in dusty lands ... but as it went along, that didn't look quite right, so the outfits got more decorative.  Hopefully the effect is neither plain not gaudy. 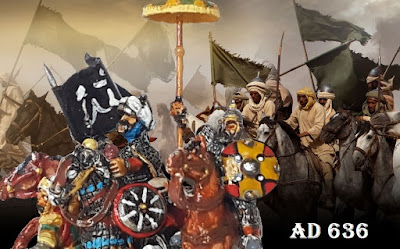 (Khalid ibn al-Walid against a background from the film)

If you look at the background from the movie about Khalid's life, you can see the plainer colours used in the film and lots of basic flags..  It is great for inspiration but doesn't translate well to 15mm.

So the shields have devices, the tunics have stripes and the flags have slogans. 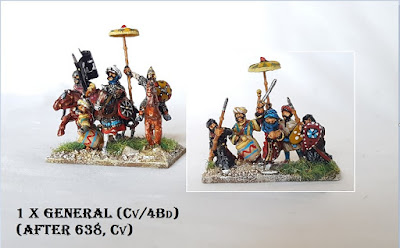 (III/25 ... the general ... in the early period he can dismount at deployment as a swordsman) 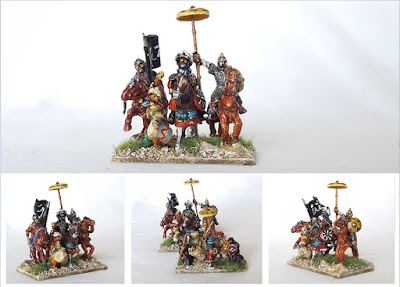 (the Arab general ... figures by Battle Honours, Museum and Essex) 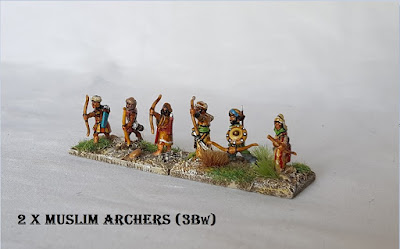 (in the early period you get 2 'fast' bowmen) 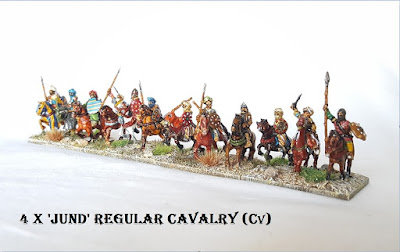 (in the later period you get 4 cavalry) 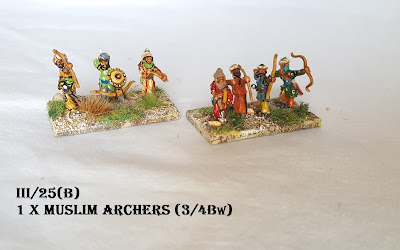 (but you only get 1 element of bowmen - it can, however, now be optionally 'solid')

I've included the 'fast' option in the photo as the figures are in the box.  I would always choose the solid (4Bw) of course -  because of the combat benefits when supported by the swordsmen.

The core of the army in both periods in the solid wall of swordsmen ... 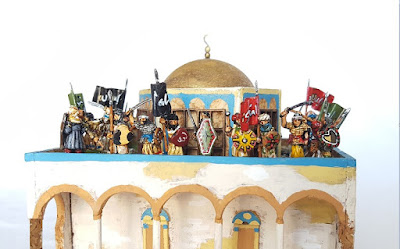 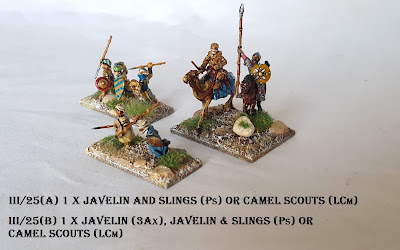 ... and the earlier period has a Bedouin option. 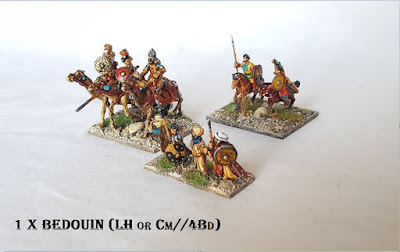 Together, the army comprises figures (mostly) by Museum and Essex plus Gladiator, Irregular, Minifigs and Donnington, with a couple of Battle Honours Mamelukes thrown in. 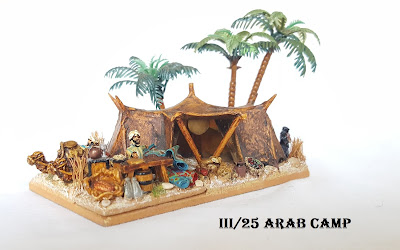 The Arab camp dates all the way back to my show game 'Welcome to Jerusalem' about the First Crusade.  The tent is scratchbuilt from card, tissue and cocktail sticks.  And there's an Arabian emporium. 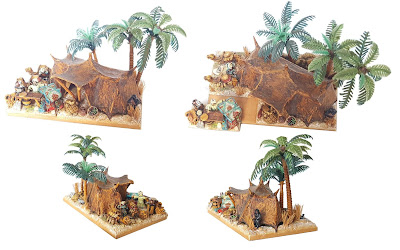 There are some animals at the back, a camel guard at prayer and an assassin sneaking around the other side.   And there's a man trying to sell you a carpet. 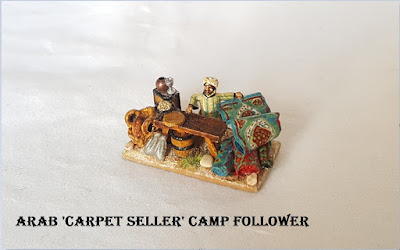 Why is there a man trying to sell you a carpet?  Well, simply, I went to the Middle East as a young man and wherever I went there was always someone trting to sell me a carpet.  I was a young traveller who clearly had no need of a carpet - but that didn't seem to matter.  It might be different these days.  Of course, once upon a time, they were magic ...

This army fights all its neighbours and has no allies. The later period army is 'aggression' 4 but I still put some terrain in the box.  An Oasis always comes in handy and the mosque (made out of cork tiles and cocktail sticks) looks nice. 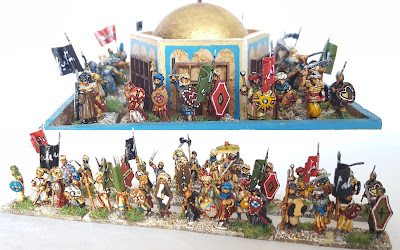 Nice "little army" Impressed by the tent, I need to get around to making several for Montgisard 1177 if I every get out of lockdown

Thanks, Will ... big by DBA standards but size isn't everything ;) Re the tent, I have made several and think they do a better job than more expensive commercial resins - just make a tent shape out of 'cereal box' type card (as complex as you like) and then dress it pva + tissue to give it the fabric texture and then go over the whole thing in medium diluted pva. I used 'tan' Humbrol with Burnt Umber oil paint over it (then rub the oil off until you like the funush) on this tent to give it that old nomadic look ...