... and Ancients in transition. 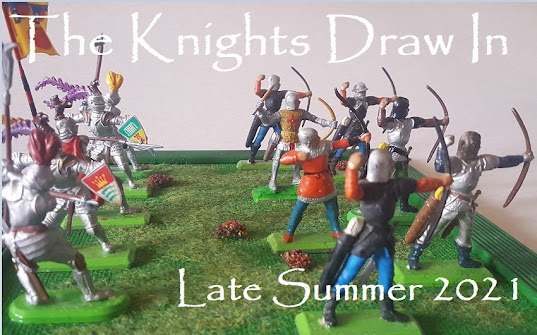 This is very much a summary (well, it's that time of year) of a season with no dominant themes.  We've not been on the road much - but we've not been stuck at home.  There have been events, though not as many as would be usual coming into the Autumn.  The DBA season is up and running, but some of the established events (such as the 'season finale', the English Open) remain cancelled.

And my own Ancients has been a mix of Zoom and Face-to-Face.  A mix of figure wargames and other formats.

We got in one of our regular get-togethers in August including playing a spirited game of Dux Bellorum  - an interesting and worthy game if not one of my all-time favourites.  It's all about timing and tempo, I think ... 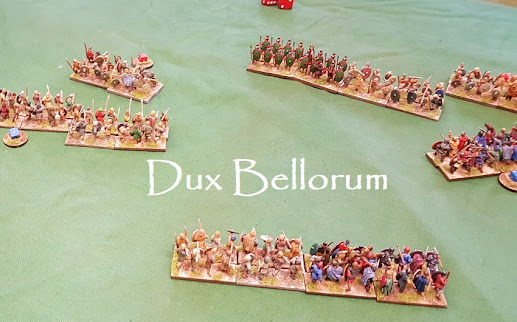 Dux Bellorum is driven by the allocation of command chips which allow localised interventions and overrides in the standard game mechanisms.  How many of these you have and where you use them is crucial and competitive.  I like this aspect although it can seem a little synthetic ... I like the unit structure a lot less (but in part that provokes a broader discussion of what Dark Age warfare might look like).  Anyway, my side won - so it must be a pretty good game. 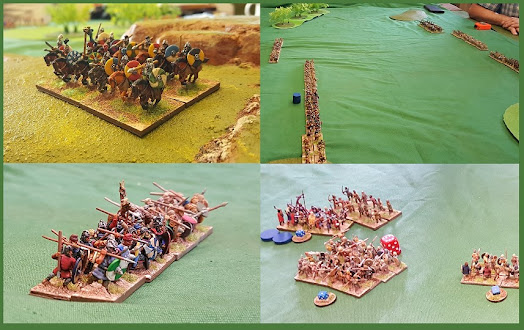 (scenes from Dux Bellorum ... figures by Richard Lockwood)
And I've been trying to keep my hand in at DBA ... here, a practice game featuring a couple of this year's new armies: Meroitic Kushite and Saitic Egyptian.  This was quite a tight match-up, but the Saitics were played by the luckier player (so the army with the 4-horse chariot general beat the army with the elephant general!) 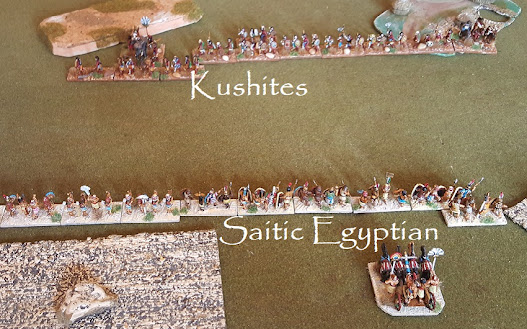 (DBA V3 Saitic Egyptian vs Meroitic Kushite)
In addition to the Games Day, BattleDay, DBA and Heritage Events, I also got up to the big City.  Not by car though (so this was really on the edge) ...
I played in the latest version of (Paul Morris Award winning) John Bassett's Wolves in the Forum. 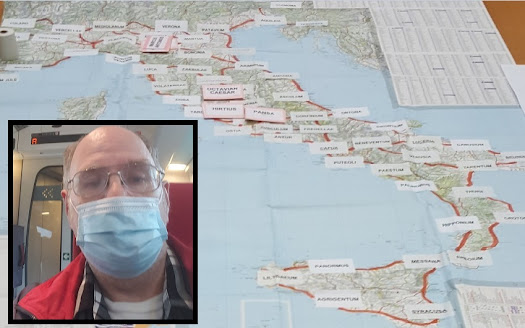 (On The Move but appropriately masked!  Shows North takes the train)
That was the board ... now for the hardware! 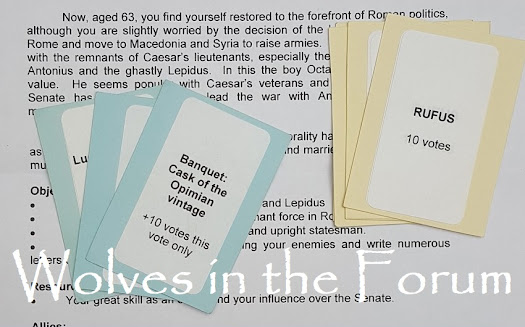 (Wolves in the Forum is a multiplayer map based game set in the last years of the Republic)
I'd love to report a clear win in this game, too, but that would be taking the role play to the extreme.  I got to play the venerable Cicero - so my job was, essentially, to prove the pen to be mightier than the sword (and to use that might to bring down the generals that would overthrow the Senate).  So me and my wordsmithery vs Mark Antony and a huge stack Legions.  Who would you be backing?
On the figures front I have been out trying 3D visual aids to help present my research on medieval formations. 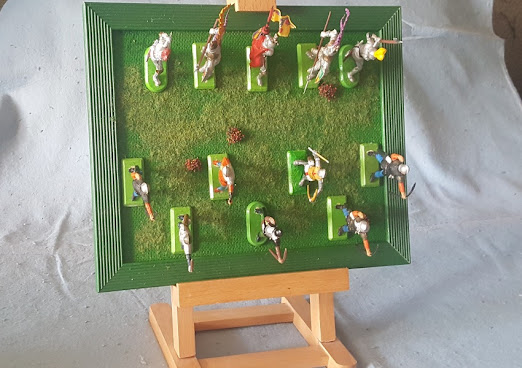 (archer 'zig-zag' visual aid)
Contemporary manuscripts seem to show archers in 'half ranks' shooting past the rank they partially overlap in front - kind of 'zig-zag' which makes sense, given that there's no evidence longbowmen lobbed their arrows up in the air in a barrage (rather they took aimed shots at closer ranges with a fairly flat trajectory).
We can debate that last point, of course, but we do need to recognise there's overwhelming amounts of evidnce to support it.  Anyway, stepping to the side to shoot though the gap between the men in front makes a lot of sense, and this seems to be what is being represented. 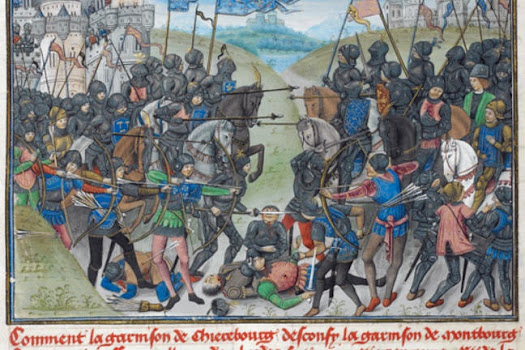 (a scene from Froissart: here the archers are opposing each other to the flank of men-at-arms) 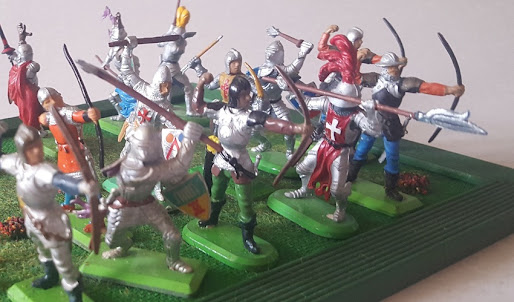 (archer 'zig-zag' visual aid: men-at-arms pushing to the front)
I've done a demo base in 6mm to help clarify what the bases in the Edgcote game actually represent.  It sort of works, but, in the quest to get an appropriate number of men on the base, I ended up making the combat troops too dense. 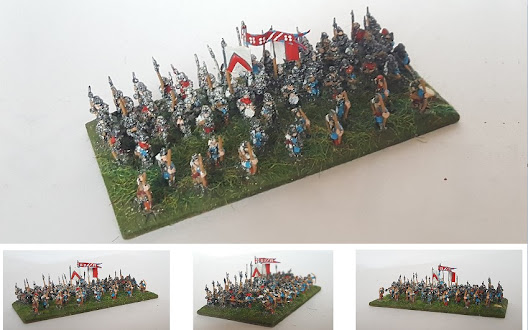 (an attempt on 6mm to depict an actual medieval battle formation)
In reality, the rear ranks - by the Wars of the Roses, anyway - would likely be quite loosely arrayed.  They were armed with pole weapons, rather than a single-handed weapon + shield.  So they need a little bit of space to maximise the full potential of their weapons ... and needed a dodge or parry as their defence.  Their loose formation, and the offset spacing amongst the longbows, would make it easy enough for the archers to filter to the rear as the better armoured men steadied for contact.
These serried ranks might even be what Froissart famously meant by describing the English formation at Crecy as a 'herse'.
As a test, here, I've 'photoshopped' the staggered archers from the model into a 15th century picture from another edition of Froissart (illustrating the battle of Crecy): 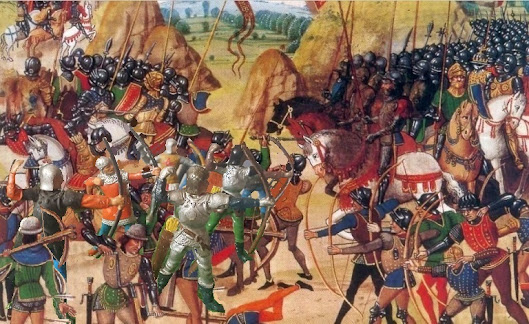 (hybrid illustration: the Froissart painter plus Phil's model blended in)
On a quick glance, it is weirdly difficult to distinguish the figures from the model ... they do seem to fit the arrangement depicted quite naturally.  This proves nothing - all I was doing was trying to test whether I and the Froissart artist were trying to depict the same thing.  Well ... 'similar', at least?
And, finally,  we have been latterly playtesting Ian Lowell's latest iteration of Rein Bow Warriors.  We were using dummy bases on a grid for now, as Ian gets a grip on his concepts.  I'm assured figures will follow.  It's too early to tell how well the innovative idas will work 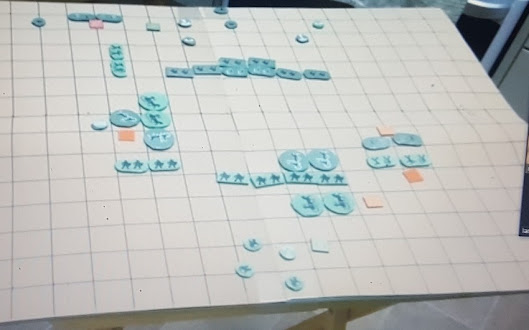 (Rein Bow Warriors)
So from cardboard counters to an elderly wolf in the Forum, from 6mm to 54s ... and some nonsense about Froissart: I'd warned there were no dominant themes to end the Summer.
Posted by SoA Shows North at 11:59 PM

Phil, you may get a chance at Ian's Rein-Bow Warriors with figures very soon.